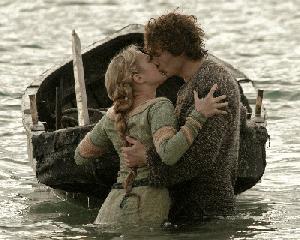 Set in Dark Age Ireland and Cornwall this story of love, betrayal and duty is a surprisingly good film. First of all its very pleasant to look at with some great buildings and beautiful settings. The costumes are a little fanciful but they don't detract too much - the director did Robin Hood Prince of Thieves and the costumes have a similar look - kind of knitted. The cast do a fine job - in particular Rufus Sewell who smoulders as the cuckolded Marke. Apparently Ridley Scott was going to do this before he got the call for Alien but he and his brother are still involved as executive producers and it can be seen what they saw in it - lots of woodland settings filmed in a style that reminded me of John Boorman's Excalibur. Of course the story is as old as the hills but that really only makes it all the more believable - I watched it alone and found it quite gripping and of course there's plenty of fighting to keep you amused. The music's pretty good apart from an out of place segment by the Afro Celt Sound System. The same song used in Gangs of New York I reckon.
Basically it's a good old-fashioned film at heart and might actually do pretty well in time - so if you want to rent a love story and you have a passion for the Irish coast or the Dark Ages then this will be your movie. At the cinema in the UK
IMDB facts here Lots of reviews here
Historical background to the saga and its various versions through the ages here.
Posted by Ralphus at 2:59 pm