CSS Off the Hook

Susan and I had tickets to see this band but let our kids have the tickets so they could see a brilliant band at the height of their powers. Aren't we good parents? They loved it so it was worthwhile.

These seem to be gaining in popularity, check out the site to see some historical themes not covered elsewhere
Posted by Ralphus at 12:47 pm

King of the Blacks trailer

Sonic Reducer Rocket from the Tombs

One of the greatest songs of all time captured here live. Rocket from the Tombs

Piece on li'l ol' us by Lakini Malich. Looks a great site. Mutant Transmissions - 'fine stuff to check out, including a piece on The Cravats, interviews with Martyn from The Dancing Dids, Animals & Men, and Hysteric Helen, a Gothic Punk's Guide to New York City (to be continuously updated), and the touching story of a young man growing up Deathrock in 1990's Midwest'.
Posted by Ralphus at 7:48 am

You don't usually associate Florida with the Civil War but this battle was fought today in 1864. The reenactment festival has just been done, over the weekend. This website has all the details and a video - looks pretty spectacular - I like a battle that has trees as a backdrop - maybe next year eh?
Reenactment details
Posted by Ralphus at 11:10 am

As this was filmed in Wells a place about 11 miles away I thought I ought to mention this cop comedy, set in a small south west town. Lots of talent - no doubt doing their best 'funny' accents - still looks worth a look at.

Adam and the Ants Plastic Surgery

This is from the cancelled Digital Tenderness dvd and is a version of the song not used in the film Jubilee but an outtake - well worth watching as it captures the early Ants in all their 1977 punky glory. This song used to open the set in those early days. I well remember the anticipation this song generated in the audience with its slow build-up. There are other interesting clips from the DVD on youtube including a Table Talk promo and Cartrouble part 2 video - showing the brilliant look of the Zerox tour. Also Dirk Wears White Socks live. This year sees the 30th anniversary of the Ants and it looks like our band Animals and Men will be making a trip to the smoke to join in the celebrations. Watch this space.
Posted by Ralphus at 7:29 am

Charley Patton is one of my favourite musicians of all time - his vocals and guitar are outstanding and I would say he was the most influential musician of the 20th century and as I have recently acquired a Complete Recordings box set I thought I'd post about him. On the above linked site there is a comic strip by the great Robert Crumb - quite a few pages why not check it out? Mp3s of Charley
Posted by Ralphus at 9:05 am

This range appears to be doing well. Good. A bit risky given the lack of Anglocentric appeal but I don't suppose the UK market is everything anyway. I think they are great and I hope everyone buys them now so to encourage more production of sympathetic sets. You can do Mexico, Italy Crimea, North Africa as well as 1870. Isn't it time someone did some Chasseurs D'Afrique? I can't believe noone has made these in this scale. These would be useful for all those theatres and possibly the Great War.
Posted by Ralphus at 10:07 am

Battle of the Herrings

This amusingly named battle from the Hundred Years War occurred today in 1429. Named after the supplies being sent to English troops on the approach to Lent.
wiki on the battle
Perry Minatures (See pic) - do an Agincourt to Orleans range of 28mm figures that are first rate to recreate the era of Joan of Arc. Well worth checking out the images on the website for the last word in 100 Years War figures.
Posted by Ralphus at 9:44 am

Most electronica leaves me cold but this collection of sound sculptures and dance grooves by Bristol's Spookboy is unique. Blending psychedelia, funk and jazz the tracks on this collection are well constructed and multi-layered - like film soundtracks for espionage movies yet to be made. Each song has its own pace and ambience but the overall mood of this compilation is energetic and fresh. Opening track Mont Blanc is on the Myspace linked above and is as cool as the mountain it takes its name from. King of the Hill is a sleazy r'n'b groove, and Penny Sanchez is a slice of Jazzadelica that gets your toes tapping and your mind wandering.
Available from Norman Records
Posted by Ralphus at 9:31 am

This is exciting news indeed. At the Cheese and Grain. June 16. Words can't describe how much I like his music - and the fact that he is coming so close is excellent.

Multiplayer online games are becoming increasingly popular - this one based on the world of Conan looks more appealing than most having a combat system for sword fighting that looks novel.
Posted by Ralphus at 9:32 pm 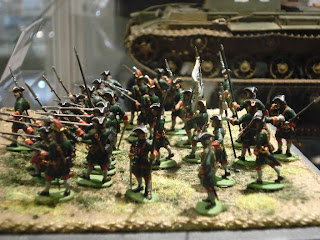 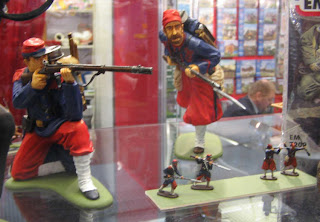 If you have an interest in what figures and kits are about to come on the market then the place to look is the Nurnberg toy fair. The above linked site has some glimpses of forthcoming releases though you need to sign up to see them in detail. This photo shows Emhar Franco-Prussian war stuff - there's photos of their Napoleonics and 1870 Prussians too. Also some excitement has been found here by my son at the 1/72 Zvezda Samurai Castle - a must have I would say and the Great Northern War Swedes look good.
Posted by Ralphus at 8:07 pm

This site is interesting - dedicated to the roadside oddities and giant fibreglass figures that adorn the space alongside American highways.
Posted by Ralphus at 11:44 am

The Japanese soldier and his world are at the centre of this acclaimed film from Clint Eastwood. Starring Ken Watanabe, this movie will interest anyone wanting to learn more about Japanese history. It's about time a film shows the Pacific war from this perspective. Watch the trailer and see what you think...it looks very good to me - I might go to the flicks to see this...Official site
Posted by Ralphus at 4:09 pm 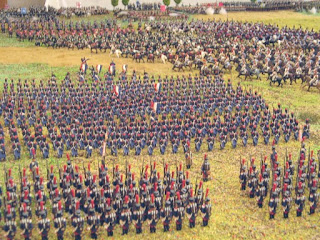 I'm not sure whether building dioramas is very popular as a hobby in the UK - probably something to do with our desire to make a game out of everything but while looking for an Eylau diorama I came upon this website with some excellent photos of all manner of historical subjects mainly 1/72 but some 1/32 too. This photo is from a Waterloo section - examples of which are constructed with all the precision of a battle painter and really adds something akin to a historical illustration to bringing a subject to life. Well done.
Posted by Ralphus at 11:55 am 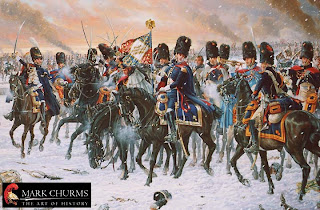 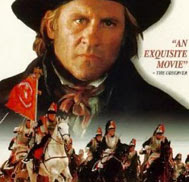 Today is the anniversary of this great battle of the Napoleonic wars - This epic cavalry action is depicted in the novel Colonel Chabert which was filmed with Gerard Depardieu, and is worth hunting down - unfortunately I can't find a trailer but if I remember the action sequences were a second unit sequence shot in Poland and pretty spectacular.
The short film below with French text is well put together and worth a look at even if you don't speak French as its full of images and you will get the flavour of this icy, bloody battle. It is where the immortal lines "Heads up, by God!" he cried, "Those are bullets- not turds" by Lepic when he noticed some men ducking. The above print by Mark Churms shows these famous cavalrymen - Horse grenadiers of the Guard about to charge against overwhelming odds.

This battle - the first Union victory took place today in 1862. Quite a futuristic engagement with ironclads and so forth. You can't visit Fort Henry now as it is submerged under water since the 1930s. Animated history of the battle
Wiki on Ironclads
Posted by Ralphus at 7:29 pm 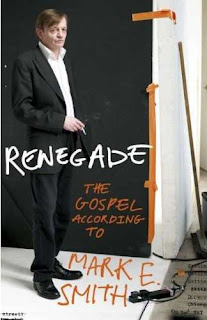 Always good when a new Fall lp comes out. There is an excitement in its anticipation that you don't get very often with other bands. Why? I think they're cutting edge rock and roll and we all line up to hear how far the envelope has been pushed each time. Our kids' first real band seen live was the Fall - when practically toddlers - I said to our eldest 'you might not like it now but you will' - now they're 12th on her last fm playlist. Not bad eh?
This one Reformation/Post tlc has a myspace playing segments as a sampler. Also Mark E Smith's autobiography's coming out in June (see pic). And a tour. Nearest gig to us in the West is the one at Exeter on the 27th March. Details on the official website.
Posted by Ralphus at 11:48 am

The mania for military glory

If you're one of those people who think all this military stuff on my blog is mad then read on - you might be right. I can't find anything on the web to back this up sadly as its too hard a subject to search for me so get in touch if you know anything about this phenomena but as far as I remember there was in the late 19th century a series of recognised maladies of the mind - including things like melancholy - and one of them was the mania for military glory - something that struck a chord with me as possibly having some merit. It explains a lot.
Posted by Ralphus at 11:35 am

More spectacular footage of the winged cavalry of the 17th century. Well worth watching. Also if you want to see more -the first US winged hussar. Zvezda are producing Janissaries and Hussars later this year in 1/72. Orion already do a great set.The above clip is mainly from the Deluge (Potop) - a Polish film from 1974. Wiki on the Deluge movie. 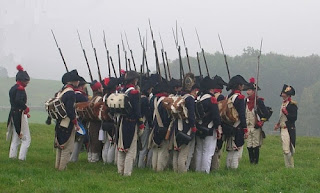 this group, recreating the soldiers of the French Revolutionary wars. I remember this group from back when I used to reenact the period back in the early 90s. They do everything very well - bivouacing in the unique style of the French - and they have some very picturesque photos on their website to illustrate what they do. They're an international group so if you live anywhere in Europe it looks like you can get involved. I think the French Revolutionary period is pretty cool - does anyone else agree?
Posted by Ralphus at 5:18 pm

How to get upstairs if you're an emperor.

As Hat have announced figures to do this period in addition to Emhar (see below) I thought maybe I ought to look and see what rules are out there. These Days of Iron look good. And they're free. If you want to spend money this set of rules 'They Died For Glory' also look good.
So far the only company I can find producing white metal figures in 20mm is B & B sold through Brookhurst Hobbies in the US. They seem pretty comprehensive though as to whether they mix or not with 1/72 we shall have to see. c/o Mac Warren 184 Woodcock Street Hessle Road Hull HU3 5DW
Posted by Ralphus at 10:06 am

43 seconds of footage from a movie depicting the Polish Winged Hussars coming to the relief of the beleagured city. Well worth a look. Anyone know where it's from? Siege of Vienna wiki