When we were the Terraplanes we used to cover this song. About 1983 it was, which was when this was shot, but the version we knew was from the 60s (though they've done a good rendition of it here). The actual song is much older originally by Bing Crosby in 1933. I don't know why we did it - the 'yey yey yey yah' bit with the pounding drums I think was the attraction and at the time we had two drummers. Screaming Jay Hawkins also covered it. Unfortunately we never recorded it so you'll just have to imagine it.

Sad to see Wells Somerset's most famous resident has died. He was 111 and a Great War veteran and from what we saw of him in the media a top bloke. Originally from Combe Down Bath he had a lovely accent. News article here
Posted by Ralphus at 10:31 am

Great to see a good review for our Animals and Men ep on Bristol Rocks - hopefully when we play the Fleece on the 13th August with Rita Lynch and Bimbo Spam we will impress people by our live set.
Posted by Ralphus at 9:27 am

Wiki here. Who remembers this - from about 1982? Maybe you haven't heard this jazz-tinged bit of post punk loveliness before. An offshoot of Young Marble Giants this band did well but maybe not as well as it should have done. Funny now hearing it it conjures up images and feelings from around the time - the nostalgia of young and carefree times. I think at the time I used to play the lp when I was in a bright and breezy frame of mind...which was more frequent than now when I am mostly in curmudgeon mode. 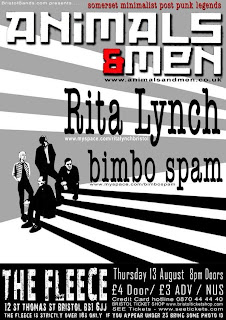 Here's us rehearsing for our gigs in Bristol (13th August the Fleece) and Lyons France (19th Septembre) - also check out our new ep on Convulsive records.

Bad Detectives on the radio

If you missed the BDs on the radio when they were on a week or so ago you can still listen to them online and you can catch up with all the music and gossip from Frome's hit factory.
Posted by Ralphus at 1:32 pm

What more than this do you need? I'd like to think the future of music would be made of things like this but it's not gonna happen is it?

Hi,
I wanted to draw your attention to this important petition that I recently signed:
"Save Live Music at The Griffin, Frome"
http://www.ipetitions.com/petition/griffinlivemusic?e
I really think this is an important cause, and I'd like to encourage you to add your signature, too. It's free and takes less than a minute of your time.
Thanks!
Posted by Ralphus at 10:18 am

Susan and I are big 70 Gwen Party fans. We used to love them when Peely used to play them on his show in the 90s and have always tried to get our hands on any vinyl that comes up on ebay etc. Love to see them reform one day. Until that day you'l have to be content with clips like this one. If you have never heard them give them a try - they are the greatest band of the 90s I reckon.

Another great Animals and Men review

Excellent review for our new ep - when's the backlash gonna start?
' .... “John Of The Sword” has all of the catchiness of an Arctic Monkey’s single, only it’s not tragically gay....'
Posted by Ralphus at 10:44 am

Despite being old and snaggle toothed this is the first time I have ever clapped eyes on Kleenex, the Swiss band from the 77 era, who were quite an inspiration to a lot of bands - Animals and Men being one of them.

Good news indeed for locals interested in comics, graphic novels and so on. Heroes Assemble is the online shop and it's apparently going to be in Palmer Street.
Posted by Ralphus at 10:27 am