As a break from all the old blues records I spun this one and thought 'wonder if there's any clips on the old internet' and found this. You have probably seen it. Also see this film

Last year we were trying to describe our home town and Susan and I started going ' A Little Village M*********er Little Village' which, them not knowing the reference caused a quizzical response. Listen to the intro and hear what we meant. Actually I could easily write a song with that as the chorus 'LVMF Little Village.... LVMF Little Village' but it would be a bit of a 'Drinkin' Wine Spo-dee-O-dee' rip off. Anyway listen to this intro and tell me that SB Williamson isn't the coolest man that ever lived.

Daughter Bea is on this show tonight (7.00) supporting her boss with some ancient Steiff bear automatons (she works for a toy company).
Posted by Ralphus at 10:52 am

Every now and then I get the desire to try and replicate the Excello sound - dark, echoey, minimal and (here's the hard part) brilliant. Slim Harpo is the most famous but Lightnin' Slim has a vocal style that is a joy to behold. Best thing I have read on the Excello label is Mike Leadbitter's Crowley Louisiana Blues booklet - maybe I ought to scan it.

This song should have been a number one. It still makes me somehow adrenalised - maybe it's playing with my teenage memories of being 15, dancing to this in a disco, with the knowledge that at any moment a load of squaddies were going to try and beat you up for so doing. Good times. No seriously I think there is a menace in Feelgood's music that is bang on for the time - there was a lot of frustration and rage around in the 70s or was that just round our house?

Before Dr Feelgood came along I was mostly into blues. I didn't really have any faith in the music that was going down in contemporary Britain I have to say at that time. The Old Grey Whistle Test was to me the most boring programme on telly, but something clicked with me with the Feelgoods - I think it was the harp - they even did a cover of Checking Up On My Baby - they reminded me of a Yardbirds or similar beat boom band that had been locked in ice for ten years - they sounded like Johnny Kidd and the Pirates with harmonica. I didn't jump on them quick like - oh no - I was so disdainful of modern music at the time that it took a long time to melt through my indifference. But one of the great influences on bands by the Feelgoods was in my opinion a sense of no-nonsense, no frills, no loons, down-to-earth mono black and white music and it set a nation on the path to punk. 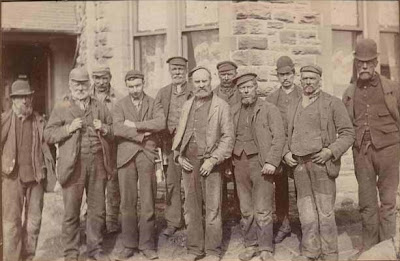 This image has just knocked me sideways! From here. It's a group of Somerset miners while they working in Abertillery showing local miners 'long wall techniques'. Now I can start my Radstock miners reenactment group!
Interesting image of a Welsh miner from 1819 with a great story also here
Posted by Ralphus at 3:14 pm

The first section of this film is of particular interest to me - it shows footage from around here. This is up Haydon behind the miner's houses - my Uncle Terry used to work there at the time. Well done to the man who filmed this - a classic bit of film.

Are you getting nostalgic for the snow? If you like the stuff then you might enjoy this beautiful film which shows the epic snowfall and the attempts to get trains moving. I wish there was more of this sort of stuff...magic 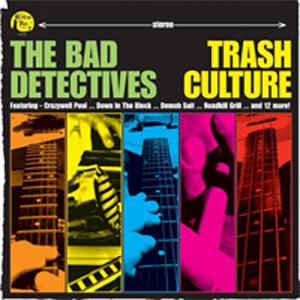 One band that isn't afraid to admit to being influenced by Dr Feelgood is this band now releasing their third cd - talk about prolific...lots of themes and musical styles are covered though the bedrock is based on the Canvey sound of the 70s.
Favourite is of course the 'certain to be a hit' song about the Cerne Abbas giant turning his baby's head which I believe is going to have a promo made for it so fingers crossed - I can see local tv loving it to bits. There are some great tracks on this pot-pourri of RnB - hear a sampler from their album on the myspace.
Posted by Ralphus at 5:28 pm

Thanks to Bad Detective Andy for telling me about this (funny who you bump into)...
A new film by Julien Temple on the early days of groundbreaking band Dr Feelgood. According to the bumph
Oil City Confidential http://www.oilcityconfidential.co.uk will be launched as a groundbreaking rock'n'roll cinema event across the UK on 2 February 2010. The cross-UK screening stars Wilko Johnson in a concert with special guests and a red carpet introduction by Julien Temple, beamed live from Camden's KOKO. Cadiz Music presents a Product of Malitsky production - Digital distribution by Arts Alliance Media - Distribution by HanwayFilms - Soundtrack available from EMI on 1 February 2010. Register for cinema listings at http://www.oilcityconfidential.co.uk - purchase tickets for the KOKO event at http://www.koko.uk.com/gigs.php?event...

It's about 30 years to the day since this record was released. It was recorded in September 79 but we had to wait an agonising amount of time for this to actually come out - I remember all sorts of excuses for its delay like an Abba record selling loads and the plant couldn't be bothered to press just a thousand in their Christmas rush period and so on. Of course Peel played it the first song of the night the actual night when he got it - which was nice - and the rest, is of course history.

This is one of my favourite clips of Serge Gainsbourg...

I don't think I have ever seen this before - wasn't really shown much at the time I suppose - I think it's a nice video with a simple theme done well - I miss 90s videos...

They Drive By Night trailer

Why is it you don't get any good movies on tv any more? There was a time when you could watch a double bill of George Raft movies but when was the last time you saw him or one of his contemporaries on your screen? This is a pretty star studded affair that is worth watching if you miss old monochrome movies.

We were having one of those 'grabbing singles out at random' sessions last night and came across this golden oldie. It really is a time capsule with all its name checks and so forth. Not sure who the band were - journos and members of the Hot Rods or so I thought...good record though.

I Can Tell - The Pirates

This is how Susan and I remember the Pirates - we were lucky enough to see them a few times, around this time and believe us - they rocked! We were used to seeing all the good punk bands from both sides of the Atlantic but this band took the place apart...something about the perfection of Mick Green's guitar took me - one who was used to Wilko and various acolytes - onto a new level seeing the originator. He had a brilliant career - I remember seeing him on telly playing behind Paul McCartney at the Cavern and I know he played with Van (baby what baby?) Morrison but this was our favourite moment... them rocking the younguns in a piratey way.

Sad to hear that the great guitarist Mick Green has died. A truly brilliant musician. More here
Posted by Ralphus at 9:03 pm

The Leather Boy 'On the Go'

One of the great records of all time this crazy track will bore into your ear.

I didn't forget it was Elvis' 75th yesterday but I just couldn't decide what song to remember him with but now I have decided...it's this stomper.

Ah those were the days. Sue and I were at this gig - still have the flyer - it was Leroy Gorman on bass but Andy Warren was in the audience and took over mixing as the gig wore on... McLaren was there too in a tartan suit with kilt...this audio commences about the time Sue started to faint due to lack of air...good times. Actually the references to the UK Subs are interesting - they were playing somewhere nearby that night and there were scraps between rival fans after the gig. If you like Ants stuff someone has uploaded a bunch of 77 bedroom demos onto Youtube...interesting...I really like 'Weekend Swingers' - anyone got the words?

A film in colour shot just before the General Strike of 1926. I am interested in all manner of things related to mining and this footage is an amazing glimpse into a world that has been lost forever.

Tonypandy riots and the Welsh miners' strike of 1910 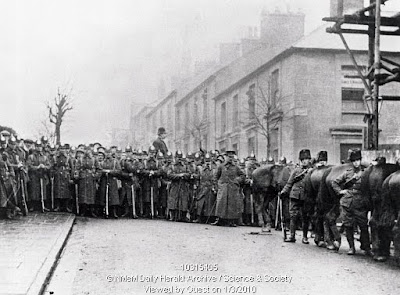 So this year marks the centenary of this important slice of industrial history.
A time when Churchill deployed troops to the Welsh coalfield and miners and their wives were attacked at the point of the bayonet.
Tonypandy riots wiki.
More on the Cambrian combine strike here. Also more on this series of events here.
Posted by Ralphus at 1:33 pm

Hope you like this - fact is if you don't I'd be a little worried if I were you.