Great clip from the early 70s... Teds seem to be trying to emasculate themselves by throwing their genitals against the hard floor - why?

If you are a fan of early Subway Sect you will certainly know the distinctive guitar of Rob Symmons - jagged spikey strumming in groovy little riffs that go around and around in a cool whirl - well he's back in the Fallen Leaves giving it to us again old style in a band that sounds like classic timeless raw stuff in the vein of the Downliners Sect. They've done an excellent session for WFMU - if you check out their Myspace you'll be able to hear them and see some videos - well worth the time I assure you...
Posted by Ralphus at 10:56 am

If you like Thomas Hardy or films about the Napoleonic wars you might be glad some kind soul has uploaded all the parts of a 1998 adaptation of the Scarlet Tunic. Filmed in Dorset and set in the Napoleonic wars it tells the story of a forbidden love between a German Hussar and a local girl. So it's maybe Tess of the D'Urbevilles meets the Duellists...

More punk vamping in this classic that would have to be on my jukebox selection - listening to this might make me play air harmonica...

The Fairies Anytime At All

Our son is off at Exeter Uni - been gone about a month - we miss his djing skills and of course the opportunity to say check this out. I think he would enjoy this 60s freakbeat beauty that has some lovely punk harmonica on it.

Orange Fuzz 'Our Love Will be There'

O.F. hail from Middletown Ohio and specialise in unearthing 60s garage classics and playing them in their own punky style - this is a version of the Troggs 'Our Love Will Be There' which I think you might like... Watch more Orange Fuzz on their Youtube channel 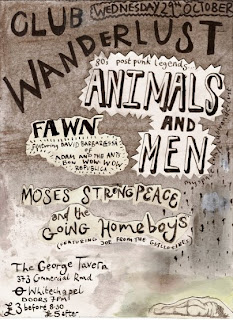 29th October - Club Wanderlust. Looks like a great evening... hope to see you there...

I'd like to think that for every town, village or city there is some movie that has been filmed there. Obviously some more than others - I was talking to someone from Brooklyn who gave a whole list of movies filmed there but I'd also like to think that even fairly remote places like Radstock where we live have some cinematic glory. This sequence from this railway comedy classic is in my opinion our place in the sun... if you notice in the background a conical hill - that's a slag heap of coal - a batch and that places this scene along where the Colliers Way cycletrack runs. If you like old transport give it a whirl.
Actually I was talking to my parents about this film and they told me 'Jiggles' Orchard - a local rag and bone man had quite a bit of screen time in this film as his horse and trap was at a level crossing during one of the shots.

Gene Vincent 'Ain't that too much'

This b-side from 66 would be on my ideal jukebox selection - there's something about it that just hypnotises me - that riff? Waiting for the harp solo? Pump it up and see if it gives you the same pleasure that I get. I heard the Bad Detectives on Frome FM last night and they played some GV - wonderful.

My current pinball interest led me to thinking about juke boxes and what you might put on it - and so to play in the background while we played pinball Susan and I made up a jukebox playlist - singles that you didn't mind hearing again and again if needs be - obviously a lot of them have appeared on this blog in the last few weeks and this is one of them. Classic stomping intro followed by a witty song possibly about someone falling in love with a shop dummy I don't know - lyrics here it's classic Downliners Sect who were quite the musical mavericks in the pantheon of British beat groups. I recommend the album of A and B-sides as it contains the classic ep of 'sick songs' ... not your usual moptop fair.

I'm sure if you take the time to watch this you'll love this. John Peel used to play Doo Rag a lot - they were part of a wave of people doing wild stuff with the blues in the early 90s. I loved them - do me a favour and watch this and tell me you're not inspired...

Great clip from 75 with Wilko singing. Lee Brilleaux on harmonica. I was reading about the Canvey Island Monster, one thing led to another and I found this stomping clip. The crowd are interesting - note the Feelgood silk scarves...very typical of the period...

MU - the French punk band - have a new album out - I think it's mostly old songs redone - but that'll do for me Tommy...here's an example of what they're like these days...

Any of you watching the HBO John Adams miniseries on More4? Produced by Tom Hanks it is really good - one of the best things I've seen on the American Revolution for a long time. Here's the trailer anyway - you should get a broad idea of what its like from this. Visual effects film here

Wierdsville. Written by Rod McKuen... the flip is 'I'm a Mummy' which I'm sure we'll feature in the future. Ok the future is now - also check out the follow up the Son of the Mummy here.

We used to love the KLF. They had a crossover appeal back in 91 that meant they appealed to all sorts and all ages. This video is their crowning achievement in my opinion with its strange set and model railway. I know a lot of people spend a lot of time interpreting the background of the ideas behind this music but I suggest you just enjoy the musical ride. 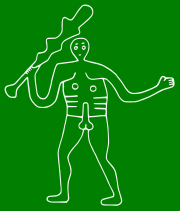 If you're a fan of the Bad Detectives you'll be glad to hear that they have a new album recorded - expect the usual mixture of culture references and jokes over rock and roll beats - the top track for them is a ditty entitled 'The Cerne Abbas giant turned my baby's head'. If you don't know, the Cerne Abbas giant is a chalk figure carved into the hills in Dorset, most notable for his erect phallus. Historians debate as to the date of its creation - it could be intended to represent Cromwell or could be a lot older than that. They intend to shoot a video in spring so something to look forward to there.
My son used to wear a t-shirt to school with this image on it - the teachers felt they couldn't censor him as it was ancient history!
Posted by Ralphus at 7:25 am

Have you ever seen this movie made by the great director of the silent classic 'Napoleon'? It's terrible - all shot in the studio - even the battle and bivouac scenes - almost as if he became mesmerised by dialogue and forgot his lessons as a silent director. Such a shame but I am sure there are fans of this movie out there - it has a cameo of Orson Welles as inventor Robert Fulton who tries to sell Napster the idea for a submarine...which is the best scene. Fulton was commissioned to make a craft 'Nautilus' for Bonaparte - some steampunk author could have a great time with 'what ifs' if the Napoleonic wars had featured an undersea dimension. Imdb on the movie

Starts off with an interview. One of the most exciting live acts I ever saw, Bow wow wow were to me the best pop act from the early 80s - they had everything - including a predatory manager when they started. Great musicians, an uncompromising attitude - young, hip and about as real as you could get.

B A Robertson versus Bow wow wow's Annabella

This is a great clip of B A Robertson getting ripped to shreds by Annabella - she is absolutely right of course - see the clip and hope things are better for women in music nowadays... watch a better interview with Ms Lwin from 83 here.

There's a story out there that next year - spring or summer the Oblivians and Gories are touring Europe. Is this true? I shall be there if it is... until then enjoy this vintage clip from 96 of the Oblivians doing 'I'm not a sicko there's a plate in my head' which is quite a stormer.

Howlin' Wolf 'My Mind is Ramblin''

Not that well known this ode to the Oldsmobile Rocket 88 car is one of the Wolf's greatest sides. It has some great lines and should be heard more.

I saw this on Henry's blog Bad Detective and thought maybe you'd like it - it's about the Southend scene and its place as an influence on punk - particularly featuring Dr Feelgood - one of the most influential bands of the 70s in the UK at least.

Animals and Men LP out 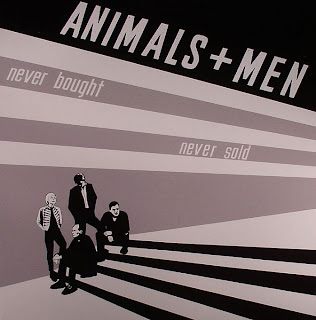 Animals & Men - Never Bought Never Sold [MR024LP]
Yes indeed - a 12 inch vinyl long player is out on Mississippi Records. Tracks are
Side A
Don't Misbehave In The New Age.
Waiting For My Stranger.
I Never Worry.
Terraplane Fixation.
Shop Talk.
Dreaming Of Babylon.
Treasure of the Damned
Side B
Evil Going On .
It's Hip.
We Are Machines.
The Man With The Spiked-Toed Shoes
You Excite Me Baby.
Headphones.
Shell Shock
In the US it is available through Bistro Distro, Feral Ward, Midheaven Mailorder and Forced Exposure.In France it is available through La Distro from Lyon and Moloka out of Dijon.
There's also an interview with Susan in issue 306 of the magazine Maximum Rock and Roll - wiki on the mag here
Posted by Ralphus at 10:39 am

Eddie Cochran would have been 70 today apparently so let's watch him rip up a storm with this slightly odd song about shorter hours at school, having a private phone - all reasonable requests...not sure if having a Coup de Ville is desirable...