As everyone is going on about the Battle of Britain then I might as well post this classic psyche record all about the 'not-so glamorous as the Spitfire' Hurricane. This is a superior version to the more usually heard one off the album.

'Trouble of the World' Mahalia Jackson

So Polish filmmaker Jerzy Hoffman - known for his 'Fire and Sword' epic is about to release a film about the battle of Warsaw - when the Red army was defeated by the Poles - known as the miracle on the Vistula. Not much on this film yet as it's not released til 2011 but if you are interested search 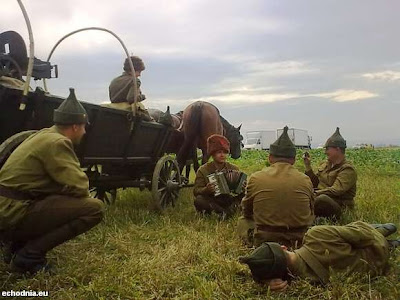 'bitwa warszawska 1920 film' and you'll find some production stills like this one of Red soldiers.

Possibly the rarest large animal on earth with only a small population of less than 50 left. Wiki here. Join the Facebook group save the Javan Rhino here
Posted by Ralphus at 10:46 am

Faithful re-enactment of the famous Civil War battle between the armies of Elvis Presley and Gordon Jackson.

I am a bit adrift as to what to put on this blog - so I will put up some part 1s of great movies. This is indeed one of the great movies - enjoy

Dersu Uzala (Russian: Дерсу Узала, Japanese: デルス·ウザーラ; alternate U.S. title: Dersu Uzala: The Hunter) is a 1975 joint Soviet-Japanese film production directed by Akira Kurosawa. The film won the Grand Prix at the Moscow Film Festival and the 1975 Oscar for Best Foreign Language Film. The film is based on the 1923 memoir Dersu Uzala by Russian explorer Vladimir Arsenyev, about his exploration of the Sikhote-Alin region of Siberia over the course of multiple expeditions in the early 20th century.

The film is almost entirely shot outdoors in the ruggedly beautiful Siberian wilderness. As with most of Kurosawa's work, each frame is carefully composed to form a dramatic picture. The film explores the theme of a native of the forests who is fully integrated into his environment, leading a style of life that will inevitably be destroyed by the advance of civilization. It is also about the growth of respect and deep friendship between two men of profoundly different backgrounds, and about the difficulty of coping with the loss of strength and ability that comes with old age.

Another clip from the below-mentioned film.

From the movie 'Catch us If you can' which is one of the best pop vehicles ever being directed by John Boorman. Some of this movie is shot in Bath - must get hold of a copy and watch it again.

One of my earliest musical memories is sitting in the back of my parent's car and beating this out on the upholstery while I sang along.

This event happened today in 1949. It would make a great film. Paul Robeson organises a benefit concert that results in mob action against the organisers and concert goers. First World War airman Eugene Bullard - the only black pilot in the Great War was attacked by a State Trooper - Woody Guthrie and Pete Seeger's car gets rocks thrown at it. Dark days.
Posted by Ralphus at 8:37 am

Aircraft from their origins to 1914 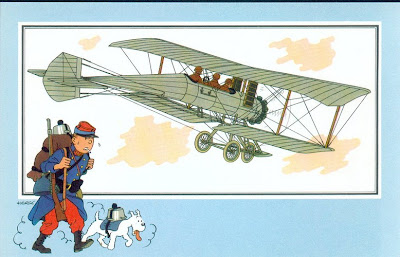 Storming of the Bastille

This is interesting - looks like a French miniseries telling the story of the French Revolution. Quite convincing this clip.

Nobody can do sad like the Shangri-Las. They seem to be able to be dramatic without making it corny. This is a brilliant song - I can't understand why it wasn't a hit - maybe it's just too darned sad.