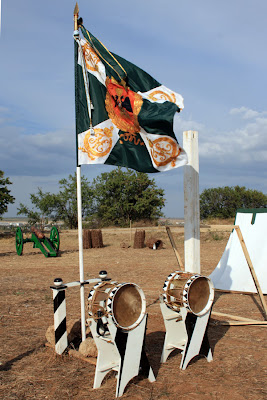 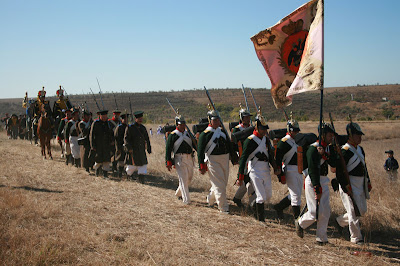 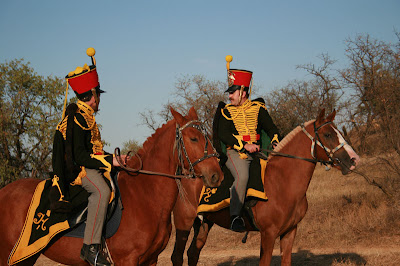 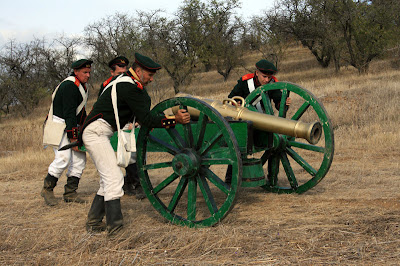 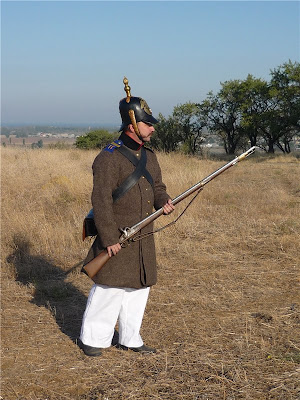 (Note - Inspired by these photos I started a new blog - Warfare in the Age of Steam where there's lots of mid 19thc stuff)
When I started this blog about 5 years ago one of my ideas was to promote the Crimean war as a period - well the 1968 film 'Charge of the Light Brigade' is one of my favourite movies and I really like the period. Well we didn't get very far with it - got a few responses but that was it.

Now I have just seen these pictures of a recent reenactment in the Crimea of the battle of the Alma with mostly Russian reenactors and I am completely impressed and need to let you all in internetland know about it. The group featured is the 33rd Borodinsky Jager regt, 1854-1855 (see pic left). Now I am calling all ACW reenactors, redcoats, Zouaves, Light Dragoons and so on to get together with the aim of making this an epic period.

Have you ever wondered about this item and how it became popular? (Don't say US despatch riders and bomber jackets as they were brown). I know a lot of people make the mistake in thinking it was something to do with the SS but it's likely that it goes back to the anarchists in the Spanish Civil War. This page on sourcing a correct style of coat by UK SCW reenactment group La Columna has some interesting notes and photos. They quote Carl Marzini, an American volunteer in the Anarchist Durruti column in late 1936, who states in his memoir, " Of course you could tell an anarchist anywhere, because all anarchists dressed the same way. They all had leather jackets, or at least if they could get them, that's what they would wear 3"
Of course before that the Cheka - Bolshevik police - wore black leather - possibly as leather coats were then a status symbol in Russia or because they could easily be wiped clean. These people fought Anarchists in the Russian Civil War who were at the time notable because of their long hair but maybe they took the idea of black leather from the Cheka and this went then onto the Spanish Civil War. Any ideas out there costume researchers?
Posted by Ralphus at 3:32 pm

We've been enjoying listening to WFMU a lot - well you get sick of the same old records from your own collection - and they have this great new streaming show ICHIBAN http://wfmuichiban.blogspot.com/ - obscure oldies of rock and roll, soul and so on interspersed with crazy old adverts - you will LOVE it - anytime of the day. They just played this one - and if you don't enjoy Swamp Blues - WTF!!???

With a rough tough bar room sound they don't come any better than J B Hutto - this clip is from 1981 - that was probably around the time I was discovering his music backed by the Hawks, on various Chicago blues compilations. Infectious aint the word for it. Watch another cracking boogie here,
Below is a clip from 1970 'Thank you for your kindness' which shows his roaring vocal style off to perfection. If you wanna hear some vintage J B Hutto then his record 'Lovin' You' is also up.

Anarchists in the Spanish Civil War

Interesting little film about the anarchist movement in Catalonia and elsewhere and how they managed their war effort in the fight against fascism.

While on the subject of unusual reenactments this link will take you to a film of a reenactment of this battle in the Spanish Civil War. See if you can spot the digital effects. This slideshow of still images is pretty atmospheric - boats, horses, biplanes, spectacular scenery - more here - what more do you want?
Posted by Ralphus at 10:34 am

This link takes you to an interesting feature by the Guardian on Red Tourism - daily battle reenactments for foreigners of China's struggle now in its 60th anniversary year.
Posted by Ralphus at 10:31 am

Jimmy Rogers 'Walking by Myself'

This jaunty poppy blues was one of Rogers' hits when Chess were experimenting with a more poppier rocking sound...Jimmy had a pretty good career as a a soloist though he'll probably be most remembered as a member of Muddy Water's band line-up.

j B Lenoir and Freddy Below

Clip from 65. Below plays on most of the great Chess and Checker recordings - he is credited with inventing a beat that sounds slightly delayed. JB was an innovative avant-garde bluesman who sang offbeat songs that occasionally strayed into politics.

Fenton Robinson 'You Don't Know What Love Is'

I'm going to do a series of blues players that you might not have heard of. This clip is from the brilliant BBC series The Devils Music which was shown in 1976 or thereabouts - I know as I had a school prize of the accompanying book for an essay I wrote. Anyway I taped the series (on audio of course as video was not widely available at the time) but it had some great performances among the documentary footage including this one of this excellent Chicago blues player doing one of his signature pieces. Watch him do 'Somebody Loan Me a Dime' from the same session. 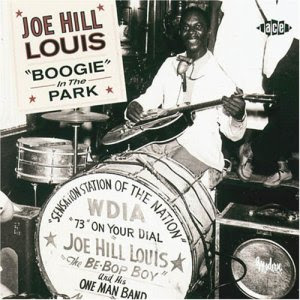 For a man who could arguably be one of the inventors of rock and roll, Memphis musicians Louis is not well known. This is one of the many great tunes he recorded.

Of course someone who learnt a lot from Charlie Patton was the Wolf - there's a certain carrying on a theme too as several of Wolf's tunes echo Patton's persona. Captain Beefheart did a perfect Wolf impersonation - the other day a Beefheart cover was on and it was spot on - I was almost taken in ...so I suppose you could follow a line from Patton to Beefheart but then as Patton practically invented blues as we know it he's probably in every damn guitar picker/singer of the 20th century. 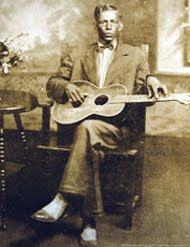 We (Animals and Men) recorded a version of this while at Grrrnd Zero in Lyon. We also played it that night on stage too. Now you can hear the original - although it's actually a cover of a spiritual from the Delta Big Four. Recorded in 1934 this one. Bertha Lee Pate (1902-1975) wikipedia entry

Here's a clip from saturday's great bill. See below for a band that we fell in love with. Thanks to whoever took it - now we know it all wasn't a dream.

We were blown away by this band who played on the same bill as us at Ground Zero, Lyons - they need to be more widely heard - they are excellent. I won't try and categorise them as I am not a journalist but watch this clip from Saturday and see what I mean. Download songs here

As a kid I probably never laughed so hard as I did at this when it was on tv in the old days. We showed this clip to our French host at the weekend. I think you'd agree it is one of the high points of British music. Another colour sequence with intro by Tommy Cooper is here 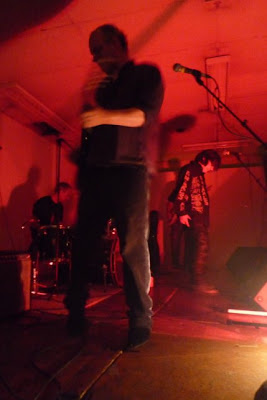 Thought you might like a look at a couple of images by Caryne Pearce of the highlights of Animals and Men's trip to play a gig in France. What a city? What a brilliant time. 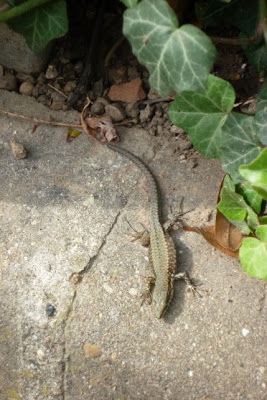 Never seen this clip before. I love Snatch - Patti Palladin and Judy Nylon's punk minimalist duo - they just are sooo underrated - this clip is from 1979 - it's worth checking out the rest of their stuff but it's a really difficult name to search on the internet - Snatch - but they weren't to know. Watch Eno in 1974 backed by Judy Nylon on guitar. (Geoff might like this)

This is a really good clip of a song I like a lot. Nice to see. It seems as though Hell has a new book out that was originally written in 1973 - the Voidoid - more here.

My Dad gave me a pretty good musical education from the old days. This is one I have fond memories of him playing me on 78. It's great and I can't understand why some ad campaign hasn't gotten hold of it.

I have declared today 'Man or Astroman? day' and all through the next few hours we have to just watch some of the great videos up. Why aren't there any bands this good nowadays?

Beatles 'September in the Rain'

I've been doing this blog for years and I think this is a first - a Beatles track - a Decca demo. This cover is for anyone who got wet in the days rainstorm.

Pandoras 'You Don't Satisfy Me'

I don't know nothing about this band - just ran into the clip on Youtube but its good - it's very good...see what you think? It is kind of like the real life version of the Hollywood craziness of the clip below but that's purely coincidental - they weren't linked videos or anything like that...I was actually watching Count V clips.

The Carrie Nations 'Find it'

All pop music should be mimed by people who don't actually play on the recordings - that way you get the best of both worlds. Maybe it's like that already? Who knows? Anyway this is a great clip from the Russ Meyer classic.