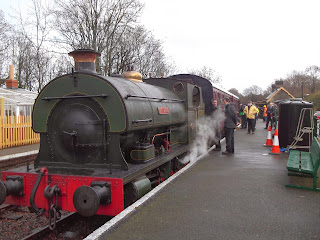 Yesterday we went on a short trip to the Heritage Railway Station at MSN. Was great fun and pleasant to see the station awash with steam.
Posted by Ralphus at 11:13 am

Mining songs from the North Somerset and Beyond - by Dave Byrne and the Guss and Crook Band and Chorus.
I picked up this cd (a tenner from Radstock Museum) and I have to admit it's well worth getting if you have an interest in Mining. The music's good and well executed. Proceeds to Radstock Museum.
"These workers' songs are not folk songs in the recognised sense but songs written for a particular purpose," he writes. "Usually to garner support for miners in times of industrial strife, to raise morale and funds for miners on strike or sold on broadsheets to raise money to support the families of colliers killed or wounded at work." The CD is being sold to support the work of Radstock Museum, which is the best place to go to learn about the local coalfields. The album was made possible thanks to the research carried out by museum trustee Tom Randall at the time of the mine closures and in subsequent years. Dave has been singing for nearly 50 years.
The CD is available for £10 from Radstock Museum, Waterloo Road, Radstock, North Somerset BA3 3EP, tel: 01761 437722, or directly from Dave on 01761 419224. 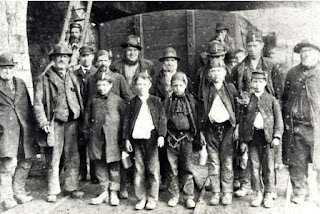 1898 photograph of Camerton colliery lads wearing the guss and crook harness, with a group of adult miners. They are also wearing caps with candles in them.
Posted by Ralphus at 12:45 pm