I thought it might be fun to make a chart of the best and worst Napoleonic movies - I decided not to include miniseries. Thanks to Mike and Andy for their help in compiling it.
1 - Voyna I Mir (1968) Russian epic that is one of the most expensive movies ever.
2 - Waterloo (1970) great film of the battle. Steiger is good as Napoleon and the various small characters are fun
3 The Duellists (1977) Ridley Scott's directorial debut is a picturesque look at the emnity between two French hussars.
4 War and Peace (1956) Hollywood version. OK Henry Fonda was miscast as Pierre but Audrey Hepburn as Natasha makes up for that.
5 Napoleon (1927) - Silent film about the early career of Napoleon. Impressive tryptich at the end.
6 Master and Commander (2003) Peter Weir's naval adventure.
7 Captain Horatio Hornblower RN (1952)
8 Colonel Chabert (1994) Depardieu plays the title role set in the aftermath of the Napoleonic wars. Excellent depiction of Eylau in flashback
9 Adventures of Gerard (1970) Based on a novel by Conan Doyle this rarely seen Brit flick is worth watching.
10 The Battle of Austerlitz (1960) Abel Gance directed this largely studio shot epic. Strange. Watch clip here


Some of the films that didnt make the list are Woody Allen's 'Love and Death', the 'Pride and the Passion' - Sophia Loren in Spain. Kolberg (1945) is a Nazi made epic that is terrible. The 'Scarlet Tunic' (1998) wins a prize for having the lowest budget - investors got parts in the movie in exchange for dough. Watch the trailer here
Posted by Ralphus at 8:22 am

Someone was saying they haven't seen this Hollywood version of Tolstoy's epic novel. I quite like this - it's a different kettle of fish to the Russian version but it is worth a look. Wiki

My son who if you read this blog is a Samurai afficiando is getting ready to watch this Takeshi Miike movie at the cinema so I thought I'd tip you off in case you like Samurai movies...

Animals and Men live in Frome 28th May 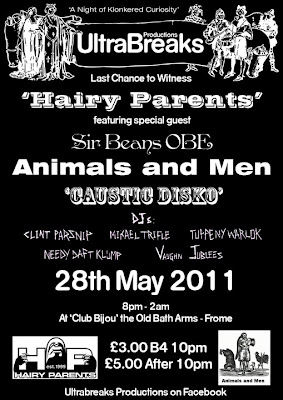 Mississippi records have issued a big vinyl box set of this influential band. Buy it now before they all sell out...