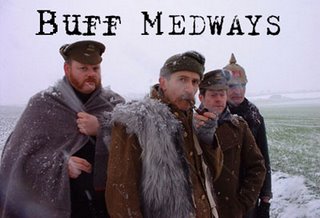 The Medway Wheelers was apparently the name of the cycle club of Chatham-based Childish's mum. Also the title track on their latest album.
This is a great video from an interesting band. They have managed to combine a love of raw garage with some unusual themes that have included a First world war concept album '1914'.
Considered a worthy artist by the media Childish has starred in his own Arts documentary for the South Bank Show.
Posted by Ralphus at 7:08 am