Adam and the Ants Videos 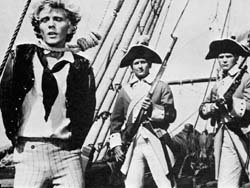 If you have got so excited by the approaching date of Adam's autobiography then watch a few videos from the golden age of his pop career.
Dog Eat Dog - this was probably my favourite of the chart hits - Prince Charming possibly the worst - there was some controversy at the time that the tune originated from Rolf Harris' War canoe - apparently Ant/Marco settled out of court. Hear a remix of the two songs here. The look here is based on the Incroyables, name-checked in Ant Rap - reactionary dandies of the French Revolution.
Goody Two Shoes was the first solo hit - Friend or Foe was the follow-up. The jacket and cravat worn on these videos looks inspired by Naval costume of the late 18th and 19th century - a touch of Billy Budd perhaps (see pic left).
The dolman - or Hussar jacket that Adam wears in the early videos was rented from Berman's and Nathans (now Angel's) the costumiers - it was the same coat hired by Jimi Hendrix back in the 60s. The coat was made for the film Charge of the Light Brigade and was worn by the late David Hemmings as Captain Nolan.
Posted by Ralphus at 6:38 am