Ghosts of the Battlefield 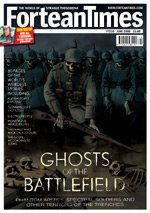 The June issue of Fortean Times is out and its one which I can heartily recommend; its a Battlefield special with particular emphasis on the Great War. Articles about good luck charms and myths are there as well as interesting side pieces on spectral battles and dead comrades coming to help. Worth a trip to the newsagents.
The Great War for obvious reasons was the centre of a revival in spiritualism and it is fertile ground for some great stories - mostly from the British side. Was there a similar interest in these matters in France and Germany?
If you want a flavour of this, a very influential book 'Raymond; or life after death' is available to read online. It deals with the existence of a lost relative, Raymond and automatic writing to contact him.
I've spent quite a bit of time on battlefields at odd times and I've never seen or experienced anything - though I heard some impressive first-hand stories surrounding Basing House - the site of a Civil war siege and one of that war's worst atrocities.
Some battlefield ghost stories are here
Posted by Ralphus at 2:03 pm