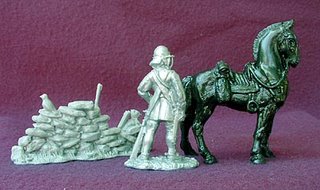 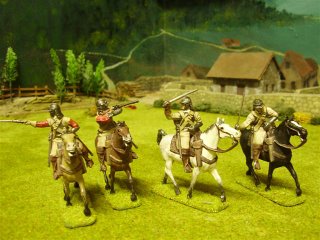 A good few years ago plastic soldier manufacturer Call To Arms produced 1/32 ECW musketeers, pikemen and command figures. Then artillery. Very nice but would they ever make the necessary cavalry? Well they finally have made the cavalry in the form of Cromwell's Ironsides and they look very good indeed. The picture of the painted cavalry is from the Steve Weston toy soldier site - they're too new for the Call to Arms website. Coincidentally Airfix have issued an English Civil War collection - kits of two mounted figures - cavalier, roundhead and a pikeman and musketeer. So there's now now excuse - you can create an 1640s force in this satisfyingly large scale. Replicants have produced dismounted harquebusiers and musketeers for some while - buy them from www.plasticsoldiers.co.uk
Posted by Ralphus at 7:18 am