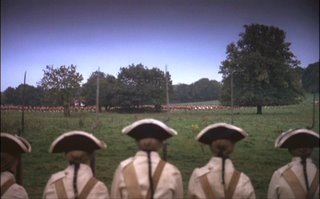 This image of an unnamed skirmish in the Seven Years War gives a good impression of warfare in the 18th century. Kubrick made the definitive movie for a lot of different genres and Barry Lyndon is one of the great historical pictures. This shot shows how the use of extras is maximised by having a mere half dozen in the foreground and then the proportions are reversed and the French are shot as a host.
Barry Lyndon reconsidered. Kubrick talks about the film
Posted by Ralphus at 6:22 pm