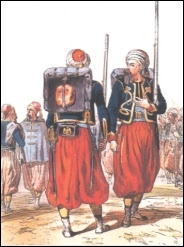 Just in case you are wondering what a Zouave is (see below) now is your chance to find out. First coming to the world's attention in the Crimea these French North African-inspired elite infantry caught the attention of the world's media and they were soon a craze across the world - in particular in America at the eve of its Civil War. This meant that the armies of both North and South had some extremely colourful units. The style of huge baggy pantalons, a short jacket and a fezlike Chechia was still in vogue by the time of First World War when eventually a more practical uniform was adopted.
Photos of Zouaves at Napoleon III's camp
Zouaves database
Duryee's Zouaves
Origins of the Zouaves gallery
Duryee's Zouaves today
Posted by Ralphus at 3:32 pm