French infantry of the Crimean period 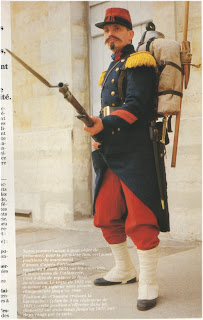 Here's a reconstruction by Louis Delperier of a French infantryman 1851-66 done for Tradition magazine - the era of Magenta and Solferino too - you can see how close it is to the Franco-Prussian war by comparing it to the image below. The Second Empire. The era of Maximillian in Mexico. In the UK where gun ownership isn't so prevalent as in France it might make sense to recreate this end of the time spectrum with Civil War muskets and renting chasspots or similar when in France. Of course there are differences when you approach it but French troops of the Crimean might get some home-based events in Britain...you never know - this reconstruction is a voltigeur - these distinctions were abolished by the time of the Franco-German war.
Wiki on Napoleon III
Maximilian and French intervention
Magenta Reenactment pics
Posted by Ralphus at 2:16 pm