Violence and music 1 The carnyx 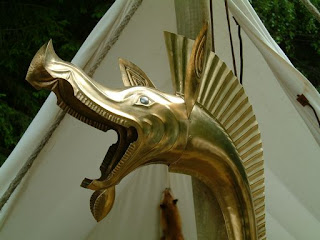 This is going to be a short series of pieces about the connection between music and violence - what were the sounds that were intended to induce a state of mind that is capable of aggression. This is a subject that has always interested me whether in the form of modern rock music or 18th century fife and drum music - what is it that makes the hair stand up on the back of the neck?
The Carnyx - war horn of the ancients
The first such sound I am going to interest you in is the carnyx - ancient war horn of the Iron Age peoples of this country and across Europe. According to Diodorus Siculus , "Their trumpets are also of a peculiar and barbaric kind which produce a harsh, reverberating sound suitable to the confusion of battle."(article on the carnyx with link to a sound files). They resembled boar's heads and they may have had the same function as the alpine horn - reverberating across valleys. On the famous Gundestrupp cauldron they are shown grouped, played ensemble style (see image). Given the style of warfare this sound would have played its part in preparing warriors for a suicidal charge - the nearest modern equivalent could be the Scottish bagpipe in the First World War. These days the instrument has had a bit of a revival as John Kenny has recorded and lectured on the subject.
Photo is from a website of Gaulish reenactors Les Ambiani and it is their recontructed carnyx.
Italian page
German Celtic reenactment group Carnyx
Youtube clip of carnyx being played