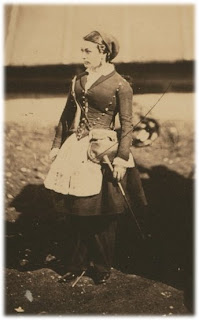 I love looking at Roger Fenton's photographs of the Crimean War. They are a link to a world now gone. Not really that many on the web though sadly. He took quite a few pictures of this lady who I presume is a vivandiere of a Zouave regiment. His photos are remarkable documents and deserve to be put into a book that is accessible to all. Index of Eastman images
Some are here
His letters are interesting - for example
While they were falling in I went down to the edge of the ravine down wh the troops were to march to the trenches before the attack[.] The French columns were approaching, Zouave’s leading. As they drew near our soldiers not on duty stood as a hedge on each side and cheered each regiment as they passed. Most of the French seemed wild with excitement tho’ some looked very anxious and well they might for it was certain that many of those voices cheering so loudly wd be still in death before the sun had set. When they had passed I went back to our columns and heard Genl Pennefather going amongst the men and begging them not to shout so as they were only giving the Russians notice of what was coming.
Fenton's letters from the Crimea
Posted by Ralphus at 11:54 am