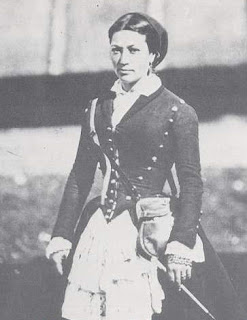 One of my first posts was about these redoubtable women who followed the French army - their dress was at its height in the Second Empire - this webpage will definitely give you an insight into a women's lot in the French army. Some of the photographs show them to be more than a little scary but if you were selling spirits to soldiers and you were one of the few women around you'd have to be scary! This one is pretty glamorous though...
As you can see from this photo from the Crimean war they used to wear a very stylish version of the men's uniforms. On the above linked site there are colour photos of actual outfits and period paintings.
Posted by Ralphus at 2:51 pm