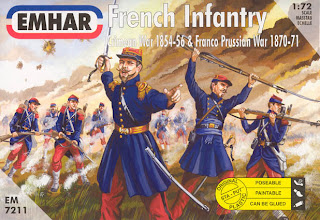 It's a bit of a golden age for 1/72 plastic figures at the moment with many interesting and well produced sets coming out - and none more eagerly awaited by me than this set of French infantry for the reign of Napoleon III. Check out the above review for images... Zouaves and Prussians to come. Features British company Emhar's poseable plastic so some variation is possible within the given sculpts. With all the manufacturers in this scale producing good quality figures like this I hope more people get into plastic as they are aesthetically better anatomically than most metal figures and the scale fits in with the stuff you find in model shops...and it won't cost an arm and a leg.
Also new out at the moment is Italian infantry of World War 1. Hat Industries are about to produce early Great War French. I'd like to see someone produce compatable white metal figures to fill in the gaps - for example gun crews for the Franco-Prussian war - to go on ACW guns and limbers. (Incidentally I am thinking of using Fire and Furia Francese mods to the Fire and Fury rules. If I ever get that far).
When wargaming was in its infancy you used to be able to get figures in this style - why not now? I presume the answer is in the UK where small scale model soldier production is part of our heritage if you like - plastic figures are looked down upon. Not so in continental Europe where they love 1/72 plastics but they have no cottage industry of figure making so can't fill the gaps. Does that make sense? Chances are you've stopped reading by now anyway but to conclude - if you think 1/72 plastic figures are just for kids then you're missing out on a lot of good things in the industry - the only problem is waiting for new sets to come out.
Posted by Ralphus at 8:38 am