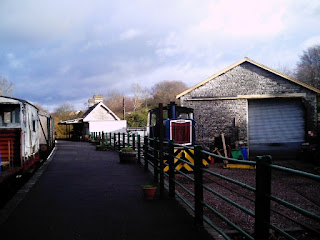 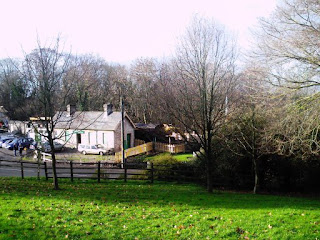 Today we paid a visit to Midsomer Norton's restoration of its Somerset and Dorset past in the form of its S&D station and an ever-increasing amount of railway stock. Not much of a Railway buff so I don't know the terminology but it looked impressive - every time you go past it there's been some improvement - apparently they should be up and running by 2008 so well done to them. They have a bookshop and a dining car where you can eat out in style. They also have a WW2 pillbox on site - I would have thought an ideal venue for small WW2 living history events. The whole site could be nicely backdated. My mum's father was an engine driver on this line so it was a treat to see the green and cream colours bright and new. Reminded me of Buggleskelly - the station in Will Hay's 'Oh Mr Porter' - now that is a Railway film...wasn't Arthur Askey's The Ghost Train filmed at Midsomer Norton? No apparently Devon. Certainly its writer Arnold Ridley was from Bath.
Anyway if you are into trains and you're in the area pop along and see how they are getting along. S&D BLog
Posted by Ralphus at 7:50 pm