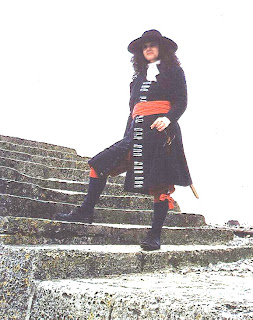 So here's a picture of me as a Monmouth Rebel - namely Nathaniel Wade who led the Red Regiment and wrote an account of the battle. I was playing him for a TV programme when I was exactly the right age for the 85 Rebellion - 40 years old. Wade was friends with the Bristol Quakers who colonised Pennsylvania. He also became Town Clerk in later life.
The site is the Cobb at Lyme Regis - the Dorset seaside place where Monmouth landed. Also the setting for the movie The French Lieutenant's Woman.
Posted by Ralphus at 2:35 pm