Frome in the news again 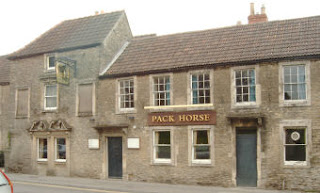 This time about a ban of santa hats in the Wheatsheaf pub. Nice to see Freda, 84 years old and landlady of the Lamb and Fountain (see pic) since 1968 getting some publicity. This is one of the truly great little pubs... anywhere. More excellent photos of Frome's historic buildings here at the Civic Society.
Riotous Frome
Frome in Somerset is an old wool manufacturing town with many artisan's dwellings dating from the early 18th century - worth a day out if you fancy exploring a town over the Christmas break. The rebellious clothworkers of Frome declared for the Duke of Monmouth in 1685, after Sedgemoor most of the rebels were hung or transported. The town itself was punished by it being occupied by Royal troops - a British equivalent to the Dragonnades. Many of the buildings of this era still stand and the house where Monmouth stayed is now a coffee shop. Frome reccovered enough for Defoe to describe it in the 1720s "so prodigiously increased within these last 20-30 years, that they have built a new church, and so many new streets of houses, and those houses are so full of inhabitants, that Frome is now reckoned to have more people in it than the city of Bath, and some say, than even Salisbury itself, and if their trade continues to increase for a few years more ... it is likely to be one of the greatest and wealthiest towns in England". He estimated a population of 10,000 - a phenomenal number for the time.
Frome is also famous for its riots - the last one was a race riot which took place during World War Two when the Black GIs refused to stay in the area locally known as Chinatown, and entered the town centre fighting with the white soldiers there. Riots and rebellions behind it Frome now has a reputation for being an arts town with quite a lively music scene. As I was on the theme of pubs in Frome I thought I'd throw in a picture of the Pack Horse above which we used to practice back in the early 80s. I can still remember playing the Space invader in the lounge bar while Dave wrestled upstairs with a bass riff. When he got it right we would go back up and join him. The result is here
Posted by Ralphus at 8:37 am