This image of a miner in Yorkshire from 1814 is an intro to a piece about the Somerset coalfield strike of 1817 - this was a time of agricultural failure and high unemployment and faced with a reduction of wages the miners of Radstock, Camerton, Paulton etc struck. Gangs of hundreds of them roamed the countryside armed with cudgels and the mines were occupied. Troops were called in to restore order including the new Lancers from Bristol 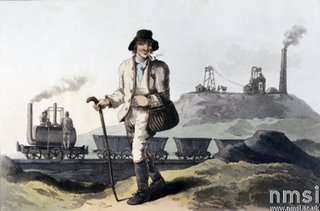 . Four were arrested for riotous assembly and order was restored. The steam engine in the background is interesting. It's Blenkinsop's Salamanca, on the Leeds and Middleton Railway, 11 years before the better known Stockton to Darlington Railway opened.
Around here one William Ashman built a steam loco-motive to run on the coal tramway tracks around Radstock in the 1820s but it was too heavy. Shame. Picture from here
Posted by Ralphus at 1:07 pm