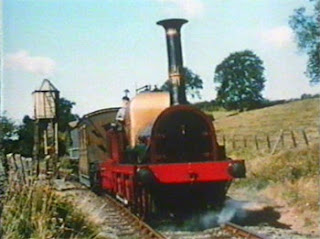 Well I have been following a locomotive theme for a bit so I can't proceed without mentioning this Ealing comedy shot 'round here, back in 1952. Susan's uncle, Jim was in one shot where cricketers are featured. The plot involves locals running a railway themselves using a museum piece loco - the 'Lion' an actual antique which was damaged during filming. If you've never seen this film then put it on your list of films to see - it's a lovely comedy - not exactly funny - but one of the British greats.
Fansite here
Trivia here
Posted by Ralphus at 10:37 am