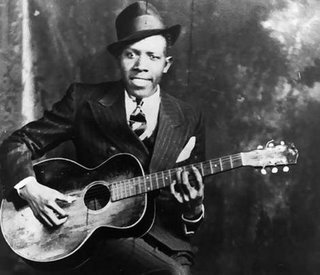 Interesting article about the legendary bluesman's guitar up for sale. Estimated to reach 3 million pounds.
Johnson is one of the most influential of all the great delta bluesmen - particularly among white rock guitarists as his King of the Delta Singers compilation was a widely owned album in the early 60s. I think he's brilliant, particularly lyrically. I used to listen to him a lot way back when though these days I prefer to listen to Charley Patton. Definitely you need at least one Robert Johnson album in your collection - the guitar isn't so essential.
Wiki on Robert Johnson
Posted by Ralphus at 8:42 am