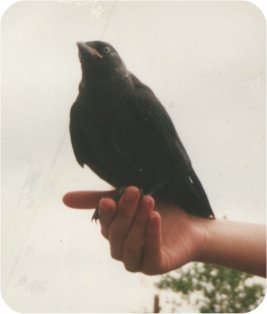 The last few weeks around our home has seen the annual assembly of Jackdaws, who noisily gather for a time, arguing and fussing in their hundreds. After a while they disperse and quiet returns. They are very intelligent birds and legends abound of courts and parliaments which have included the punishment of offenders and the election of 'Kings'.
We hand reared about 6 a few years ago as their nest had been destroyed, raising them on mealworms and cat food. They were often kept as pets by country folk in the old days and I've heard people used to split their tongues with a silver sixpence and thus enable them to be able to talk like parrots. Ours became very tame and would land on our heads and hands at a moment's notice, especially if you were carrying food. They would also land on the back of our dog and hitch a ride. Apparently Jackdaws land on the back of sheep to eat ticks so this may have been a version of this. We decided to reintroduce them back into the wild so little by little encouraged them to spend more time with the other birds. Initially they used to come back beaten up but gradually they seem to have been accepted and stopped coming back. Occasionally though we do get visits by a gang of by now huge specimens who generally shout a greeting before flying off. Wiki on Jackdaws
Posted by Ralphus at 7:05 am