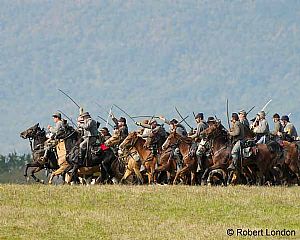 This weekend sees the reenactment of Bull Run - an early Confederate victory in the American Civil War. It's only done every five years apparently so it will be worth going to if you're local. The uniforms of Bull Run are fascinating - much more colourful and fancy than the later practical outfits. Confusion reigned on the battlefield as both sides had grey-clad troops. Zouave uniforms were worn extensively. Anyway if you can't make it why not watch some videos of earlier reenactments. Historical articles

Visitor information
Posted by Ralphus at 7:04 am