Wilko by the Bad Detectives 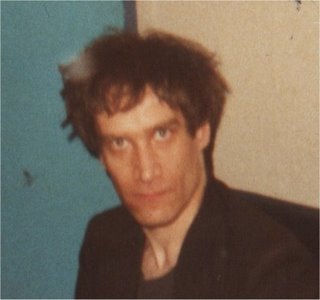 This is an interesting picture taken by Henry and Ivan of Wilko Johnson back in about 82 at Dingwalls in Bristol to accompany an article for a fanzine I tried to put together called Stranded in the Jungle. I also have some photos of Screaming Jay Hawkins that were also going to feature in the same issue.
It's a very interesting pursuit going through old photos - you find photos of things that crop up later in life - just as an example of what I am saying you might take a photo of a ferret when you visit somewhere with the children as babies and now they are adults the whole house is overrun with them and then you find the original photo that you had forgottten about, if that makes sense.
Of course Henry and Ivan later came to support Wilko and meet him in different circumstances - I wonder if he remembered that interview? More live shots soon... Bad Detectives website
Wilko Johnson website Watch him doing Roxette on the OGWT while in Dr Feelgood
Posted by Ralphus at 9:24 am