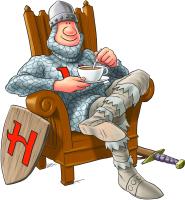 I am not sure whether to watch the BBC's new Robin Hood series starting tonight; it promises to be a contemporary take on the legend - so when WASN'T anything NOT a contemporary take? Errol Flynn was hot when that version is out - Richard Lester's Robin and Marian was steeped in the late 60s - the thing is with any filming is that even if you tried not to it would be a contemporary take. What you can guarantee is that this will be aimed at the sort of people who will probably be already vomiting white cider by 7 o'clock on saturday, in other words it will be a dumbed down affair, a 'Robin is an ASBO' type of thing - the costumes already tell us that - how many yards of leather did they use to make Robin's outfit look like a hoodie? I expect the Normans will look like Harry Hastings (left) or the Tony Robinson Maid Marian baddies... Can I also guess that it will have a nauseating rave soundtrack? Probably easier on the ears than Clannad. BBC Robin Hood webpage
Posted by Ralphus at 1:29 pm