Cosplay at the London Expo 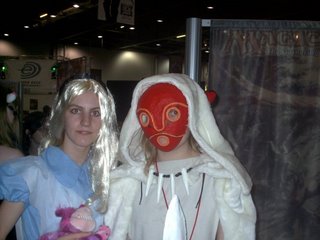 Yesterday daughters C and B (with James) went to the London expo to take part in a Cosplay competition. Cosplay is an import from Japan and it involves making and dressing up as a character from animation. My two went as Princess Mononoke and Alice in Wonderland. They didn't win but had a great time. They're used to dressing up - being reenactors since toddlers I'm really proud that they get a kick out of it. They got lots of photos taken and tv interviews - very similar to a historical event! The winner was great, apparently, dressed as Yoshi - funny as we have a cockerel called that. The Expo was brill apparently - they got a lot of toys including some cool Army of Darkness figures and a subscription to Neo magazine.
Wiki on Cosplay
Posted by Ralphus at 7:54 am