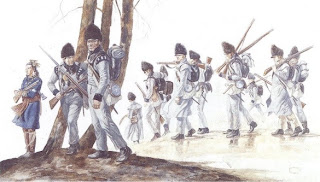 Image from Canadian military heritage gateway
Canadian historians are fanatical about the War of 1812. Rightly so. Looking around the web I found this petition on the War of 1812 website for all Canadians to lobby their Prime Minister. We've all seen on this blog the excellent bicentennial celebrations that have marked things like the Battle of Austerlitz, Friedland, the bombardment of Copenhagen - let's see something spectacular in the Americas...
Dear Prime Minister Harper,I am writing to ask for a national strategy to be established for commemorating the 200th Anniversary of the War of 1812.With heroes like Sir Isaac Brock, Laura Secord, Tecumseh, and Charles Michel de Salaberry, the War of 1812 has become a great source of patriotic pride for all Canadians. Because of this, the bicentennial offers an ideal opportunity for the federal government to take a leadership role both nationally and internationally in the war's commemoration. It is about remembering the sacrifice of veterans, no longer with us, who fought for Canada on Canadian soil.In the United States, the Senate gave unanimous consent last year to the Star-Spangled Banner and War of 1812 Bicentennial Commission Act and it is now in the House of Representatives for approval. In representing a society expert in commemoration, US legislators realize action must happen NOW in order to produce meaningful results.A similar effort is needed from Ottawa that encompasses all federal organizations including Parks Canada, the Canadian Museum of Civilization,the Canadian War Museum, Library and Archives Canada, and the Department of National Defence. Pooling resources in a unified effort will allow Canada to properly show its respect and gratitude to those who sacrificed their lives defending this nation in the War of 1812.In conclusion, the War of 1812 is extremely important to Canadians and taking action NOW by this government is necessary in order for the 200th Anniversary to be done properly. I sincerely hope you will recognize this issue's value and put forth a coordinated, results-driven process that will generate a commemoration that will make Canadians proud.Yours truly,Your name.Your Postal Code or City,Province
Posted by Ralphus at 10:41 am