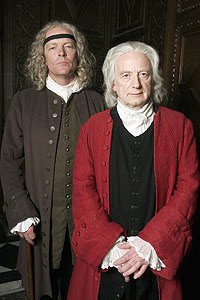 I don't normally watch tv history - it usually annoys rather than entertains but this new Channel 4 series set in London in the mid 18th century got me tuning in to see whether it was any good and I must admit I was pleasantly surprised. Based around the Fielding brothers' attempts to bring the rule of law to the capital and using computer images to recreate Georgian London it was both educational and entertaining this first episode using the infamous Harris's list as its centrepiece. (Harris was a man who called himself 'Pimp General of All England' and published a gazeteer of prostitutes recently republished in an accessable format). Each of the ten episodes will be an hour long but it didn't seem to be at all boring - I was almost ready to watch it again on 4 plus 1 so much did I enjoy it. Check out the micro site and watch the video clips to see if it's your cup of tea - some of the subject matter - bathing houses, prostitution and so forth - is pretty near the knuckle for its 9pm transmission time but on the whole I think the gamble has paid off and some worthwhile television has been created. Times review
Manchester evening news review
Posted by Ralphus at 1:40 pm