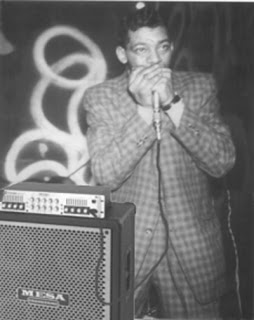 So Little Walter is about to be inducted in the Rock and Roll Hall of Fame in March in the 'sideman' category. What!? Sideman? Talk about an anti harmonica bias. Little Walter was the first musician to use amplified distortion for its own sake and his song Juke was the first and only harmonica instrumental to hit number 1 on the Billboard R and B charts. Apart from his ground-breaking harp work Little Walter was a talented vocalist - John Lee Hooker placed him as his favourite singer. He wasn't a nice man - his life was shortened by his tendency to get into brawls - but surely it's time to give this man some respect for being more than a session man on Muddy's records - he outsold Muddy Waters frequently with his solo stuff - this man was a genius - up there with Charlie Parker and Hendrix for pushing the boundaries of his instrument to new levels - practically single-handedly creating a genre. He didn't leave much in the way of film footage sadly - but his records are some of the highest quality Chicago blues put onto vinyl and every music lover should own at least one compilation - if they want to be called a music lover, that is. Check out the webpage http://www.littlewalter.net/ where this photo comes from - from the section on his amplifiers. A book on this great man is available called 'Blues with a feeling' by Tony Glover (yes THE Tony Glover who wrote those great harp tutorial books) ... well worth tracking down.
Posted by Ralphus at 10:48 am