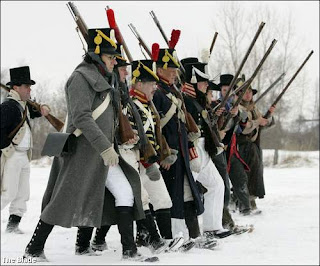 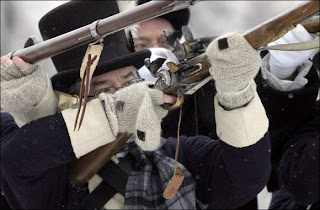 Napoleonic reenactment takes place all over the world - here's a news article about the Battle of the River Raisin reenacted recently in America. The battle was fought between British and their native allies and American troops. I'd love to do a War of 1812 reenactment - not sure what side I'd be on though - probably a native ally if I'm still about. Maybe I ought to go over for the bicentennial. Found this quote on the British Indian allies at the Raisin
Of the militia there are only four killed, and I dare say not more of the Indians, who behaved with the utmost bravery. It was them who took the General, and is said to have killed some hundred who took to flight; indeed very few escaped. You may rely on it that without the Indians we never could keep this country, and that with them the Americans never will take the upper posts, for let them send forward as many men as they will, if we employ the foreign Indians we can have equal numbers, which is more than is wanted, for in the woods where the Americans must pass one Indian is equal to three white men, let the nation be what it will. Source
Anyone in Britain interested in the War of 1812? I suppose I know the answer to that question from when I used to do the French and Indian war - there are people interested but of course we're none of us getting any younger. Off the top of my head I suppose the best thing would be to aim to have a big get-together in Europe in 2012 that doesn't clash with any big American events so people could go to both. A register of people interested in Militia, Indian or Regular could enable people to gradually get kitted out and keep in touch. Maybe I'll set up an internet forum - or maybe I'll have an attack of sanity and not bother...
More on the Raisin and another set of photos here.
Glengarry Light Infantry website
Posted by Ralphus at 8:58 am