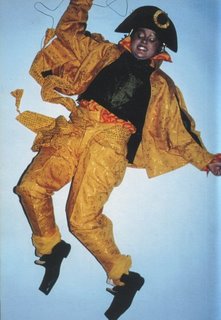 Of course with the movie Marie-Antoinette out, and kids loving Pirates no doubt everyone is talking about the 18th century punk French revolution cross over so let's remember who started it - Vivienne Westwood - our most influential designer - she who mixed piracy and the Incroyables with walkman's and Bow wow wow. Mind you I think it was a mistake going for the Incroyables (reactionary dandies) side of thing - the sans-culottes were the true fashion radicals in my opinion- but I think the whole thing was anti-punk and that's where that was coming from...it could have taken off a lot bigger than it did but then I don't expect anyone minded - they've made enough since... anyway she is responsible for getting me into a kilt so bicorns off to her - a true original. I suppose there is still time for people to wear pirate gear on the street - pirate punk is a genre in itself now, so who knows 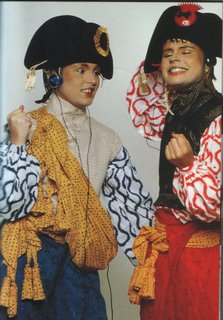 http://en.wikipedia.org/wiki/Vivienne_Westwood
'I can't think of any event in history that did more damage than the French revolution. Not only to culture, but also to society. Yes, I am English. It's in my bones. (Very unpatriotic and interested in French culture because although the revolution smashed so much, but nevertheless the French still had ideas up until the First World War)'. Vivienne Westwood
Posted by Ralphus at 2:14 pm