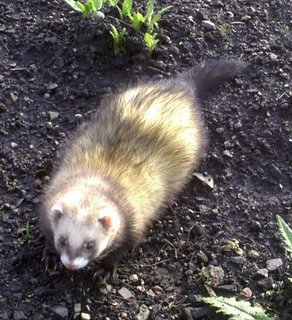 Did you know that if you do a Blog search for Napoleon the ferret you get some other ferret - an American one - so I think it's time to give him a bit more exposure. As you can see he's a little on the chubby side but he does get plenty of exercise - he just has a healthy appetite.
I've managed to prevent him getting the nickname Nappy but he is occasionally known as Mr Chuckles because of the happy noises he makes while he scurries about. Maybe I ought to record it and put out a cd - bet the other Napoleon hasn't had that.
Posted by Ralphus at 5:53 pm