V for Vendetta - out soon 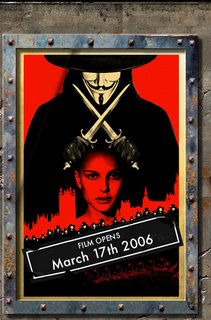 This movie based on the comic strip by Alan Moore is getting the promotional treatment as the moment - in fact Alan Moore is doing a rare tv interview on the Culture show - watch it here. He pretty much disowned all the movies of his work including this one. The plot is fudged a little by having it set in a parallel world where the Nazis won world war 2 instead of just Britain in 1997 having a Nazi government as in the original novel. It has raised questions about a film that basically espouses terrorism and whether a movie that has its central theme the blowing up of a major landmark would have been made in America.
IMDB facts here
Novel fansite
Wikipedia entry
Alan Moore fansite and interview
Posted by Ralphus at 4:27 pm