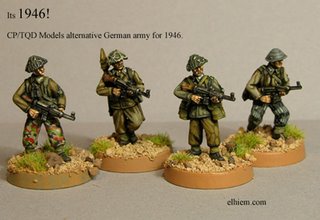 This is an interesting 'what-if?' concept based on the continuation of ww2 into 1946 - principally in order to use some of the hardware that was in development at the time. A review of the figures here. They've used a helmet design for the post-Hitler German figures that was historically proposed, being ballistically better but rejected by Hitler on grounds that it didn't look German - the trouble is - on the figures it looks a bit rubbish. Still, a novel idea if you like big tanks, rockets and the like and lust after pitting some of the late 40s machines against one another.

THE GREAT VICTORIAN WAR (all rights reserved 2006)
In this spirit I'd like to trademark my own variant on history - this variant is that Britain, in 1863 joins the American Civil War on the side of the South and mounts an expedition from Canada and captures New York. Napoleon III then invades southern Britain - only an expedition from Bismark of German troops reinforcing London saves the day.
I will call this 'The Great Victorian War' tm and the good thing about it is that people who wargame the Crimean, ACW or Franco Prussian war can all play together. Of course the white heat of technology means that everyone has steam powered land cruisers, ironclads, and armoured trains. If you need inspiration watch this Steamboy trailer
Posted by Ralphus at 8:58 am