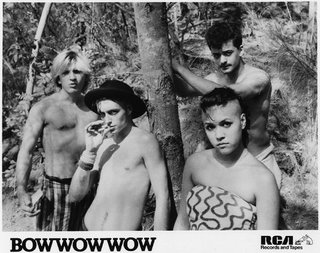 Maybe its because the signs of spring are appearing around us but I'm having a bit of a Bow wow wow phase at the moment. This is one of their best singles and will always remind me of those long lost summers when we were young etc.
In case you didn't know they were originally Ants who were then lured away from Adam by Malcolm Mclaren to create a teen pop band but soon enough they wised up and dumped Mclaren's rather seedy approach and created idiosyncratic group songs full of youth and optimism instead. Whilst the sound - tribal, latin, funk all mixed with nursery rhyme rap and chants - isn't usually my cup of tea - there's something about them that makes me love them. It's probably respect for their musicianship - the effortless skill of the backing that I appreciate - they mesh well and they make a fun bouncy sound. Isn't that enough? I must admit I prefer the later stuff they recorded when they had ditched Mclaren - the Going Gets Tough album is still listenable to. They're touring the US at the moment. Download songs here
Posted by Ralphus at 9:21 am