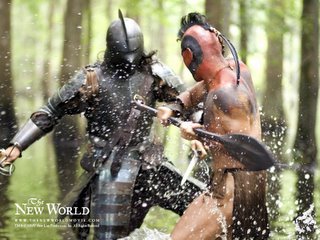 This eagerly awaited tale by Badlands and Thin Red Line director Mallick is based in Jamestown 1607 and features Colin Farrell as John Smith. This 'arthouse movie with a Hollywood budget' is apparently out in the US on the 25th (January 13 in most cities). Mixed reviews are gathered at the above link. I'm enthusiastic about this film despite what some of the critics say - historical pictures that aren't about Rome are as rare as hen's teeth these days and this promises to be a visual feast if nothing else. Check out the official site that has a 360 degree tour of the Powhatan village and some very atmospheric stills
Posted by Ralphus at 9:28 am