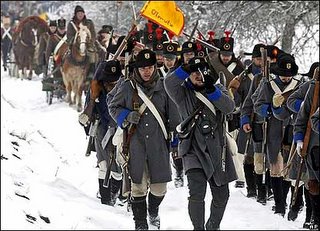 MORE PHOTOS AND VIDEOS
Thanks to Eric from Holland here are some more images of this epic Napoleonic battle. This dedicated reenactor drove 2700 km - 15 hours to fire ten rounds... but despite the cold and the usual difficulties found it worth it to be on the field with 4,000 reenactors.
'It does look great, but very hard work. People having sliding and falling down all over the place. Also having to climb a small hill was very difficult to get up. Took a while before everyone was on top. Very tiring it was. Also very cold, sometimes the leatherstraps of my gaiters froze to the ground if we didn't move too long.
A lot of British we joining French regiments. Our 3eme had some of the 71st HLI members in it.
The Napoleon actor really looked the part, but didn't really have time to watch him on the battlefield. Besides the battle I never saw him again.
I think the next one will be Jena, also likely to be very cold.' Eric Timmerije

Info on the American who played Napoleon