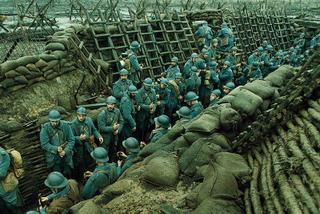 This French language movie now out on dvd is without doubt a classic and is definitely in my all time top ten war movies - of course it isn't a war movie as such - it's a romance set against the backdrop of World War One but it is very good and historically interesting so it's here in all its glory. Details here http://www.imdb.com/title/tt0344510/

The plot revolves around a crippled orphan girl played by Tatou of Amelie fame searching for her fiancee who was supposed to have been killed in no-man's land for self-mutilation. It traces her search detective fashion through the lives of the other condemned soldiers telling their tales along the way. Jeunet touches abound from inset animations and strange overhead camera work alongside the stunningly evoked Breton countryside. Several set-piece scenes such as railway stations, markets and of course the trench scenes are so well done as to be almost a distraction but you know director Jeunet is fascinated with the period and you can't help loving every drop of it. An odd cameo from Jodie Foster is a distraction but otherwise an almost perfect film. When else are you going to be able to watch a film about WW1 in the company of your wife or girlfriend and not wish you hadn't.

Previous French offerings like Life and Nothing But - concerning the search for the unknown soldier and the aftermath http://www.imdb.com/title/tt0098596/ and the film about the officer who had facial surgery have been pretty gloomy to say the least but this is a really heart warming tale if that doesnt spoil the ending. Worth 'shelling' out for!

Purple Goddess gives birth
When I received an email last evening from Chasmyn of Purple Goddess in Frog Pyjamas entitled "Kiernen's birth", my heart did a little dance.
Hey, you have a great blog here! I'm definitely going to bookmark you!

I have a programy site/blog. It pretty much covers programy related stuff.

Come and check it out if you get time :-)