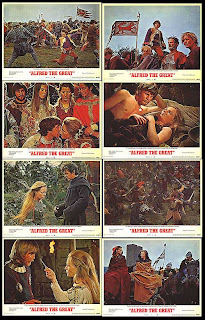 This is a vastly underrated 60s movie - it should stand alongside the best historical pictures of that era - this one had quite an influence visually on the Lord of the Rings trilogy. (To corroborate this fact look at the Vikings' shields - completely copied for one of the characters - Aragorn - the black garbed Norse are basically the blueprint for the Gondorians) Filmed in Ireland, Galway and Meath - sadly - if it was filmed around the West I suppose it would have been perfect but it has beautiful photographed scenes that really capture the essence of England at the time. There are lots of interesting facts about its location and the papier mache standing stones and so on at this website.

I remember seeing this film at the pictures when I was a kid and being totally petrified by the chanting Vikings. I wonder whether there is a slight subplot about Mods and Rockers or Hippies and Hells Angels - you probably have to see the movie to see what I mean but Alfred's bible loving pacifist in caftan takes on the black leather clad pagan pychos....what else can you conclude? Actually this trailer doesn't do justice to the cinematography - to get a flavour watch this clip.