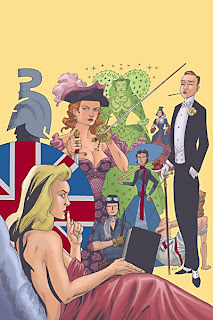 News, to me at least, of the new America-only-for copyright-reasons adventure the Black Dossier (pictured) is on the Wiki. Interesting twists. Looking forward to it.
'The Black Dossier centres on the eponymous fictional book (that provides a comprehensive review of all of the previous leagues over the centuries) which is stolen by a young man and woman in 1958 in a post-Big Brother England where they are pursued by a trio of ruthless government agents. This release also includes a variety of extras including a 3-D section and glasses, a Tijuana Bible, and the Absolute edition will include an LP record.
The 1950s League
By 1958, the League was disbanded by the government and the two remaining members broke into British Intelligence, stole the Black Dossier, and then tried to escape the country while being pursued by a trio of deadly British agents. The agents that pursue the surviving Leaguers (Mina Murray and Allan Quatermain) are "Jimmy" (James Bond, the British spy created by Ian Fleming for the novel Casino Royale and its sequels); "Miss Night" (Emma Peel); and "Uncle Hugo" (Bulldog Drummond). Mina and Allan are assisted in their escape attempt by the Golliwog, the first black member of the team.
In supplementary material that details the League's history, Mina and Allan are described as teaming up with Dean Moriarty, from the novel On the Road by Jack Kerouac, against the villainous Sachs (Dr. Sax) in America some time before the main narrative'.