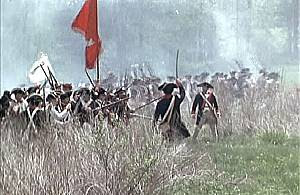 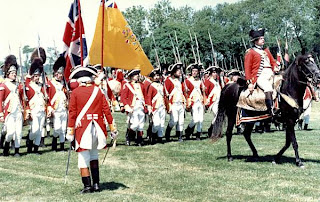 As a fan of the Revolutionary War I am a little bit shocked I havent heard of this movie before. It's a silent comedy by Eric Bruno Bergman.
Official site and buy it here
The blurb says
The Deserter, a 75 minute film, is about a British Revolutionary War drummer who accidently deserts from his regiment and is hunted down for execution.Years in the making, Borgman carefully tried to make the battle scenes as realistic as possible. Hundreds of extras were used to create a major engagement of the American Revolution."Although the film is ostensibly a comedy, the battle scenes were shot seriously," said Borgman. Being influenced by Laurel and Hardy and Buster Keaton, Borgman uses the elements of silent comedy to tell his story, using the great music of Rick Benjamin's Paragon Ragtime Orchestra to help the comedy along.The Deserter has the largest battle scenes, on American soil, in a silent comedy, since Buster Keaton's The General!
Posted by Ralphus at 10:16 am