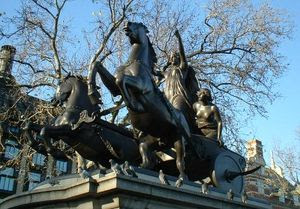 'Who's that then' asked Geoff as we passed the statue of Boudicca on our last trip to London - so I filled him in. She was a British queen who led an almost successsful rebellion against Rome. Actually this fine art nouveau statue by Thorneycroft was actually cast in Frome so I am always happy to talk about this warrior woman, also partly because I have done a tv programme (Warrior Women) on the subject and I have always considered that it should really be given the epic treatment. Now I discover Mel Gibson is producing a movie Warrior directed by Gavin O'Connor about this lady - the movie already being called 'Braveheart in a bra'. I'm more optimistic - in an interview here the writers seem to have done their research. Out in 2008. Looking further into it I discover there are no less than 4 works in production on this lady - a DreamWorks project called Queen Fury (writer Walon Green), Paramount's Warrior Queen and another called My Country by Martha Little.
Actually Hammer did an awful film in the mid 60s 'The Viking Queen' based on the Iceni leader. Not sure who's playing her in these latest movies? I think she is documented as having red hair.
Posted by Ralphus at 7:52 am