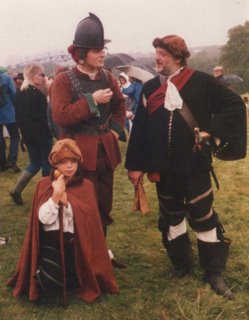 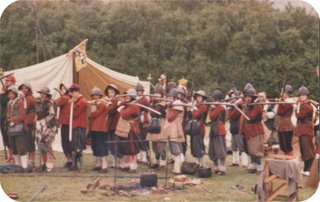 'Trail'st thou the puissant pike?' Shakespeare Henry V
I thought I'd post some more pictures of myself - this time at my first ever reenactment in 1985, where I trailed the pike for Col Nicholas Devereux's regiment and did so for about 4 years (I am on the extreme right btw). The pike is about 14-16 feet of ash pole with a spear head at the top - mainly used to create a defence against cavalry, though infantry pike v pike clashes were more common in the 16th century. It eventually became obsolete with the invention of the bayonet. It was considered a noble weapon - more honourable than the musket and was often trailed by gentlemen volunteers. It is mainly a question of balance being able to swing this long pole about and training and drill were performed to the beat of the drum to enable the 'stands' of pikes to move about the battlefield. A tell-tale sign of a force about to break and run was the wavering of the pikes.
The 'posture' depicted 'charge your pike' is the main fighting stance. In the other picture I am standing next to the late Gordon Usher of Frome who recruited me, took me along, filling the journies with stories of reenactment battles and also invariably beat me at wargames.
Posted by Ralphus at 4:19 pm