Image from With Fire and Sword 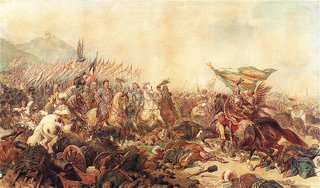 Possibly the most decisive battle of the era this conflict between Holy League troops and the Ottoman Empire ended 300 years of war between the eastern states. Not really a famous event in Britain as we were far removed from the action, though on a European level it was a decisive turning point, one of the key moments of early modern history. Document on the siege from 1683