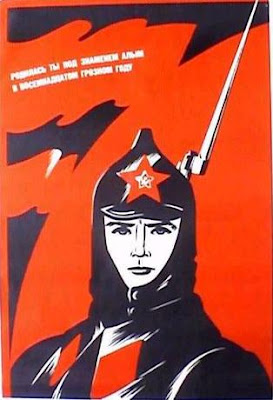 You may be bored to death with my interest in this hat - certainly my family are but that's just the way it is. If you wanna be in my Red Sotnia you have to take the rough with the smooth. These images I like - the poster's text reads something like 'She was born under the red flag in 1918'.
Anyway according to the wiki on this cap

Budenovka (Russian language: Будёновка, budyonovka) is a distinctive type of hat and an essential part of the communist uniform of the Russian Civil War and later. Its official name was the "broadcloth helmet" (шлем суконный). Named after Semyon Budyonny, it was also known as the "frunzenka" after Mikhail Frunze. It is a soft, woolen hat that covers the ears and neck and that can be worn under a helmet. The cap has a beak and folded earflaps that can be buttoned under the chin.

The hat was created as part of a new uniform for the Russian army by Viktor Vasnetsov, a famous Russian painter, who was inspired by the Kiev Rus helmet. The original name was bogatyrka (богатырка) - hat of a bogatyr - and was intended to inspire Russian troops by connecting them with the legendary heroes of Russian folklore. Bogatyrkas were meant to be a part of a new uniform, so they had already been produced during World War I, but hadn't been officially adopted. Another version, quite popular in Russia, is that bogatyrkas were designed for a military parade as a part of a "historical" stylized uniform (which also included an overcoat with "designer" cross-pieces, which also were used in the Red Army to a limited extent). Some Russian historians even speculate the parade in question was a supposed victory parade in Berlin.

During the Russian civil war, communist troops, who had no obligation to comply with the uniform standards of the Imperial Russian army, used bogatyrkas, as they were abundant and distinctive. Bogatyrkas were commonly decorated with red star pins as a distinguishing mark. Such decorations were often makeshift, but later were standardized, and a bigger star badge of broadcloth was sewn to the front of the hat, typically red but in some cases blue (for cavalry) or black (for artillery). This allowed the communists to use the image of "Red bogatyrs" fighting the old and corrupt Russian system, thus employing the original idea by Vasnetsov. At this time the hat was renamed the Budenovka after Semyon Budyonny, the commander of the First Cavalry Army, as the hat was particularly popular with cavalry units.